Despy Boutris's writing has been published or is forthcoming in Third Coast, Folio, Byzantium, and The Berkeley Times. She currently is earning her MFA in Creative Writing at the University of Houston, where she teaches and serves as an Assistant Poetry Editor for Gulf Coast. 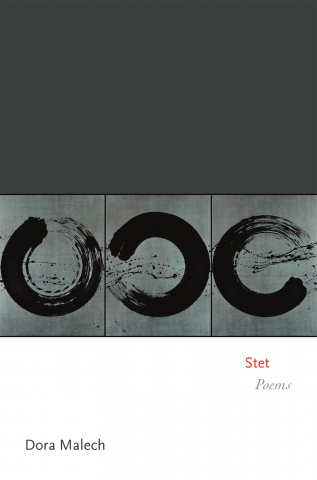 In speaking about experimental poetry, the late Tony Hoagland once asked, “[Does] the coy ellipticism of [experimental] poems signif[y] a skepticism about the possibilities for poetic depth, earnestness, even about feeling itself?” In his famous essay “Fear of Narrative and the Skittery Poem of Our Moment,” he ponders this question; many of us also have pondered this question during today’s poetic moment, when many poets eschew conventional forms and sensemaking in favor of dissociative poems that lack narrative.

Hoagland likely would have asked this very question of Dora Malech’s third and most recent collection of poems, Stet: Does a poet’s attempt to be new and experimental undercut poetry’s potential for communication and meaning-making? In this collection, Malech uses anagrams to create a distinct voice that differs greatly from the voice found in her first two collections, Shore Ordered Ocean and Say So.

Stet concerns itself with the act of writing and creating, and it does so with redactions and erasures. As the back cover informs us, the word “stet” comes from the Latin for “let it stand” or “leave it the way it was before” and is a common word among proofreaders. To “stet” is the act of making a textual change and then changing it back and so on and so forth. In the spirit of “stetting,” Stet also acts as a means of reinventing language, just as Malech attempts to reinvent her own voice through this collection.

Malech’s change of voice and her entrance into experimental poetry is most obvious to readers in the visual format of these poems: unlike most of Malech’s previously published poems, those in this collection are rife with white space, visual caesurae, and scattered lines. In “As[ ]k,” she writes: “Spit me / to shine…Wept rust me. / Get in. / Sometimes we step into something true. / Woke in the wake of      he knew too.”

Clearly, this poem differs in form from Malech’s past signature couplets, quatrains, or single-stanza poems; in this collection, she rejects all conventional forms and includes little imagery, a major element of traditional poetry. Still, despite the unconventional forms, she continues to pay careful attention to sound and music. Somewhat reminiscent of the wordplay in Brenda Shaughnessy’s “Artless,” “As[ ]k” continues to play with language: “caress        scares / revile        relive / a page         agape.”

In this anagrammatic section of the poem, Malech scrambles and unscrambles words; she engages with language and simultaneously interrogates it—but never explicitly. The poem is interesting to read in its linguistic play and associations, but its story is not clear nor is it linear. “As[ ]k” is far from narrative; readers are able to attempt to make sense of the poem’s meaning only when they place themselves in the speaker’s position. It is then that they realize that the “we” perhaps refers to the speaker and her lover, and they can recognize what is at stake for the speaker who sees the word “scares” in “caress.” The speaker seems to be experiencing a struggle, evinced by the scattered lines and often random breaks.

In a few of Malech’s poems, the scattered sensation and use of redaction is so severe that a poem will end mid-sentence. The poem “[ ]or[ ]ask[     ]” reads, in its entirety:

The terseness of this poem, coupled with its form, seems to emphasize and give great importance to each word, even those that are unsubstantive, i.e. “and,” “a,” “for”. It also feels as though “[ ]or[ ]ask[     ]” explores a subject of great importance to the speaker, but the speaker keeps that subject a secret from readers. Instead of providing readers with context with which to decipher the poem, Malech seems to make the conscious decision to obfuscate meaning by ending her poem midsentence with “and   makes   amends for...” With this ending, the poem remains elusive.

Meanwhile, another poem, “Lay and Try,” is an erasure of historian and cultural theorist Johan Huizinga’s “Play and Poetry” from his book Homo Ludens. Huizinga argued for the importance of “play” in art and culture, and Malech appears to agree. In a scattered form—typical of an erasure—she writes: “touching the origins of the line is to question form and function proceed in the mind, create for it a different ‘life’, tie logic and magic to an ear.”

In this poem, Malech adapts a paragraph of Huizinga’s manifesto to fit her own views about play and poetry within the confines of this collection. For her, “the line”—or poetry—necessitates questioning and works as an amalgamation of “logic,” “magic,” and sound. It is here that she offers readers an Ars Poetica and introduces her own views through the use of a critical text.

Here, Malech’s words literally are eroding, gradually wearing away into a mere semblance of what they were at the beginning. Much like “[ ]or[ ]ask[     ],” this poem does not provide a clear narrative or context that would allow readers to come to a conclusion about what the poem might “mean.” Instead, all that is clear is that Malech is playing with language, transforming it, and dismantling it.

The final section of the collection is made up of nine poems, which at first look like simple single-stanza poems—a welcome convention after the first fifty pages. In the author notes, however, we learn that this nine-part poem is in fact made up of nine separate anagrams of Sylvia Plath’s “Metaphors”—each poem is constructed from the same rearranged letters. Unlike the previous poems, Malech creates longer, more complex anagrams in this section, taking the letters and words from an iconic poet who also enjoyed playing with language and metamorphosizing words into something new and completely different. “After Plath: Metaphors IX” reads:

This final poem clearly retains the careful sound-play seen throughout the rest of the collection, and it also manages to imitate—or emulate—Plath’s style, even with the letters completely rearranged. Malech not only dismantles Plath’s language but also reassembles it into something new.

It is here that Malech comes full-circle: through the use of anagrams, she “found and changed what [she] became.” For a moment, she embodies Plath, and throughout the collection at large she embodies a new voice unlike any she had displayed in her first two books. In this collection, we see a poet playing with language, cavorting with words and meanings that continue cascading into something else, something new, always metamorphosizing.

This sense of play has value: Malech demonstrates her love and admiration for language as she shares poems that are playful, that are musical, and that make us think about words as arrangements of symbols that we ultimately assign meaning to. These poems remind us that poems do not always have to have a clear narrative, and their value is not necessarily in their decipherability.

Still, poems are also valuable in their desire to reach out to another person, to articulate an emotion or experience, and to create a connection with someone else. As readers and writers, we recognize the value of poetry as something more than sound and music but also an act of meaning-making and truth-sharing—whatever that truth may be. This collection feels insular: it is a poet playing with language, but the poems themselves feel hollow and futile. In Stet, Malech does not work to share her “truth” or create a connection with readers; it feels more like a personal poetic exercise.

Tony Hoagland articulated the potential drawbacks with this kind of poetry far better than I ever could; he wrote, “When we consider artful dyslexia and disarrangement as a self-gratifying end in itself, we give away one of poetry’s most fundamental reasons for existing: the individual power to locate and assert value.” It is true that Stet is an interesting read, but the collection also serves as a reminder of poetry’s power that goes beyond language play: poetry has the potential for earnestness, for depth, and to serve as a tool for communication and communion among people.