Thomas Calder recently recieved his MFA from the University of Houston, where he spent these last three years writing and revising a novel that he hopes to share with the world real soon.

Dear Reader, I've been working on my novel now for the last two years. I'm about six drafts in. After each draft I usually take a break to let the words sit, so that upon my return the flaws can jump out at me. Usually, these breaks don't last very long. One to two weeks tops, before I start getting itchy and anxious. One to two weeks before my fingers need to get their freak back on the keyboard's dance floor. That one to two week period, though--it's an ugly time period. It's probably why I only allow it to go on for those seven to fourteen days. Otherwise, I turn into a quasi-alcoholic, prone to feeling blue and unsure what to do. It's a very dark, troubling, ungodly period in particular because I struggle to work on other pieces of fiction. I'm sure everyone's experienced this once or twice. I call it fictional exhaustion (not because it's imaginary, I just think fictional exhaustion sounds better than fiction exhaustion or fiction fatigue or writer's block [which I happen to think is imaginary]). It's not that I can't work on other pieces. I can. It's just I can't get invested. I try, but I don't care what conflicts these other pieces have to offer. Their little quirks don't amuse me. Their possibilities seem quite limited. Every last attempt feels like filler. And filler is cheap. And there's no worse feeling than writing cheap. The problem, of course, is that I want to write. I need to write. I love to write. Fortunately, I've found a remedy for these periods: letters--to friends, to family, to my former colleagues. There's a lot to love about writing letters. For instance, I develop certain voices depending on my correspondence. If I'm writing to my buddy Cernuda, I'll often fill the page with cryptic predictions concerning his future. If these predictions happen to be written on these super rad, old-fashioned cards that my wife found at a garage sale (cards I often have to snatch without her knowing because she's developed an odd attachment to them), I'll use the images on these said cards to influence my prediction over poor Cernuda's life trajectory. If I'm writing to my friend Vanessa, I'll often experiment, sometimes penning the whole thing from the point-of-view of my dog, Patapouf (it's humbling to imagine what your dog thinks of you). Other times, I'll write a brief story to my two nieces, or tell my parents about a drug-deal I saw outside my bathroom window, or remind my buddy Chase that his fiancé Ramona still has time to realize she's making a terrible mistake, or to write my buddy Kyle letting him know it'll all be okay. 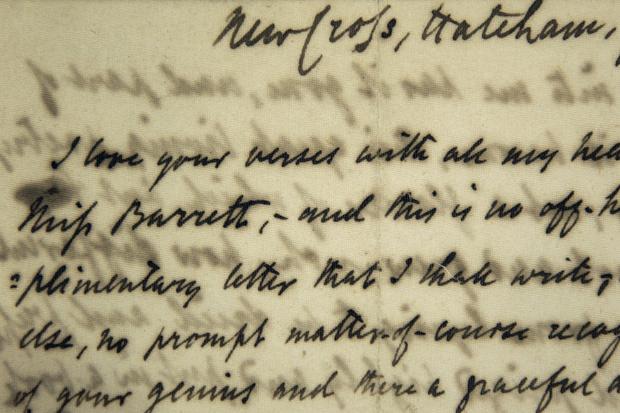 Robert wrote to Elizabeth to while away those between-poem doldrums. Letters have a way of freeing you up. You're writing just to write. You're not concerned about your character's motivation, or the plot development, or the story's pace, or that ever-nagging question: what does this even mean?! You're simply writing. Letters also guarantee you someone is reading your work (which, for an unpublished guy such as myself, is a great feeling). Another wonderful aspect of the letter writing process: people sometimes write you back! And when they do it makes the pointless catalogues and unwanted bills that typically fill your mailbox that much less of a bummer. Writing letters will also one day make you cool as shit. And who doesn't want to be cool as shit? Because here's the thing: when this whole internet fad fades (I'm calling it) and emails become as passé as these very letters you're currently writing (which in effect will make these same letters as hip as that Don Draper outfit you're currently sporting--do you see where I'm going with this): bam! You're cool as shit. So the next time you experience fictional exhaustion consider writing someone you love a letter. It'll aid in preserving your liver, maintain whatever sanity you've got left and make you a trendsetter. Plus there's the United States Postal Service to consider. It's in dire need of more pen pals. Hugs, kisses and kicks, Thomas