Relatively new to Houston, the David Shelton Gallery concentrates on the showcasing of regional emerging artists. Common Objects (January 11-February 16, 2013) brings together the work of Ted Gahl, Nathan Hayden, and Lane Hagood. Each of these artists deals with notions of the familiar, such as daily scribbles, cups of coffee, and tools for painting. Ted Gahl's work, twelve uniformly small canvases with two pointedly unmatched canvases among them, forms a single horizontal line that wraps around the front gallery space. His style is heavy with mark making and as a whole is highly unpolished and seemingly unfinished, including a canvas that seems to be only primed and sits slightly lower than the rest of the sequence. The paintings comment on painting itself, with references through imagery to masters and nods to the act of painting with works like Caught Painting and Content (both 2012). The most clever act of self-referencing is in the way Gahl thinks through the installation process with his blank canvas Pause (Comma Painting) (2012), and with the last painting in the sequence, which is on a round canvas. Pause (Comma Painting) is positioned like a comma in Gahl's sentence of paintings while the circular canvas functions as a period. The act of creating a visual sentence in his installation leads the viewer to think of the work as a whole in terms of a single thought or a single sentence about the painting process. The front room also houses Nathan Hayden's piece, there's something in my jam and it says flavors, a much larger work on velvet. His work flows into the next room where the viewer finds a large installation piece comprised of smaller ink drawings and writings hung perpendicular to the wall to form a larger design. The drawings are meticulous and the words seem disconnected, as if they come from the doodles and mindless writing one does while on the phone or in class. 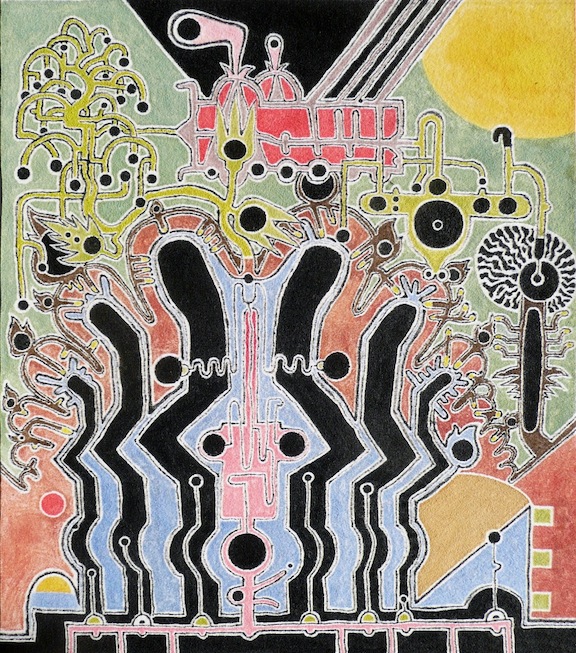 Nathan Hayden, "there's something in my jam and it says flavors" (2010) While Hayden's drawings are intricate and not unimpressive, they are at the same time unmonumental. Their smaller size implies a private quality, like a journal or notepad that someone might keep close. Yet the act of creating a doodle or jotting down memories or notes is something known to us all, allowing the viewer to relate easily to the work. The rest of the gallery is occupied by Lane Hagood's paintings. Six acrylic paintings on canvas are installed as diptychs, with two larger paintings serving as bookends to the smaller works. Hagood's work builds the strongest connection with the viewer because his subject matter, while evoking a certain personal archetype, is undeniably familiar to many. The repetition of feet and hands in the work creates a sense of a tangible and inviting although banal journey through coffee drinking, reading, and writing letters. The simple style, attention to detail, and texture in Hagood's application of paint engage the viewer as well. Being able to see the brushstrokes in the bricks feels personal and the imagery of bare hands and feet against the bricks evokes sensations and nostalgia; viewers can recall a time when their own feet lay bare against brick or sand. Hagood's work steals the show by revealing his personal daily rituals while also relating these images to the common objects in the viewers' lives.