Zachary Martin is the Editor of Gulf Coast. His fiction, nonfiction, and humor have appeared in outlets such as Washington Square, Fourth Genre, McSweeney's Internet Tendency, and elsewhere.

An Indie Bookstore By Any Other Name

Last week I had one of those book-shopping experiences that are becoming rarer by the day: I walked into a bookstore; I asked the bookseller for help finding a title; the bookseller led me to the book on the shelf, no computer search needed; and then the bookseller and I proceeded to have a conversation about the book. It was a book we had both read years ago, as adolescents, but that had stuck with us enough to demand we return to it. He had recently picked it up again himself. We talked about how it had impacted us and how it had made us think about the world. While he was ringing up my order, he told me about what I should expect, returning to the book after all these years. Was I in an independent bookstore? You bet I was. What is there to say about the decline of independent bookstores that hasn't been said already? There are the numbers, which we're all aware of, even if we don't know the specifics. (It's 6,000 indie bookstores as recently as twenty years ago, and only about 2,200 in 2010, by the way.) There's the increase in e-book sales to consider--they now outpace hardcover sales--almost none of which benefits the brick-and-mortar big-box stores, let alone mom-and-pops and most up-and-coming authors who can't demand the kinds of deals that established authors can. 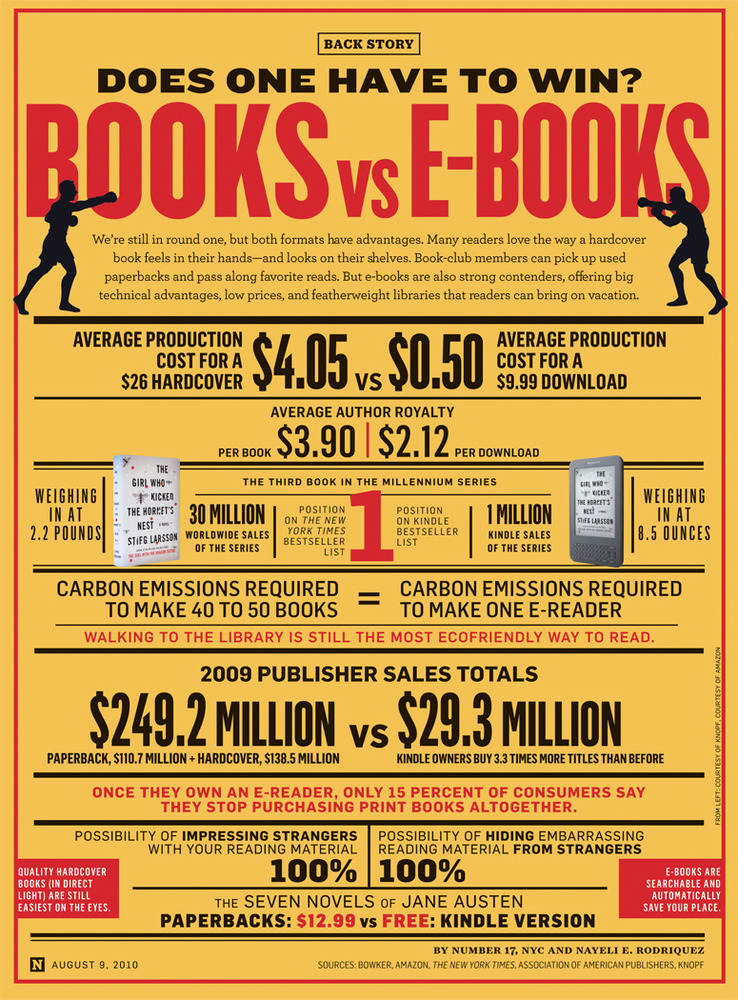 Click for higher resolution image. I don't imagine you're very impressed with these figures. They've been with us for years, and citing them widely hasn't done much to staunch the bleeding. That's alright. I didn't have my heart set on successfully using all of Aristotle's three appeals in this blogpost anyway. And, hey, they probably aren't even relevant to my experience last week, because the independent bookstore I was in exclusively sold comics, and the book I bought was a graphic novel. The statistics are a bit more mixed when it comes to stores that do the majority of their business on sequential art. Pirating, the rise of digital comics, and the success of video games all represent real threats to their livelihood, but the sales of ink-and-paper graphic novels actually increased by double-digit figures in 2012. By most accounts, comics are doing better than they've done since the nineties, when the bubble burst on collectors who were buying them up like they were pets.com stock. I find it heartening to know that comics are doing well. They were my first real introduction to the printed word when I was a kid growing up in Miami. My father, my brother, and I would all walk over to George's Barber Shop on Bird Road for Saturday haircuts. George's was owned by Jorge. My brother and I would get our rat tails trimmed--leave it long, Jorge, my good man--and then we would walk across the street to A&M Comics, where my Dad would give us each one dollar and turn us loose. To make the most of our money, we quickly learned that we had to ask the owners to pull out from under the counter the old box of Scrooge McDuck comics. We might wander the store for awhile first, drooling over all the comics we couldn't afford, even sneaking to the back for a look at the covers of the adult magazines if Dad stepped next door to the thrift store, but we always returned to that dingy box full of silly Silver Age comics with tattered and missing covers. It was from those comics that I first got the itch to draw. Drawing led to my need to write snappy captions and speech bubbles. It wasn't long before I was editing my own elementary school ripoff of MAD Magazine. Then comedy sketches. Plays. Short stories. A creative writing class in high school. Jack Kerouac's On the Road. William Least Heat Moon's Blue Highways. Hunter S. Thompson's Fear and Loathing in Las Vegas. An undergraduate degree in English. Work at a literary magazine. A graduate degree. A few lost years. A short-lived stint in stand-up. A beautiful woman who inspired me. Another graduate degree. It isn't easy to watch what's happening to independent bookstores. I love them, and I want to see them succeed. But I'm hopeful. Last week I went into an independently-owned bookstore that happened to specialize in graphic novels, looking for Scott McCloud's Understanding Comics--the first book about craft I ever read, the book that bridged the worlds of art and writing for me, and helped set me on the path to becoming a writer myself--and, along with my purchase, I got a healthy dose of optimism. I was reminded how many paths there are to literature. I was reminded of how many people still want to hold a book, to feel it in their hands, to open it up and enter into it. I'm hopeful.