Megan Mayhew Bergman’s story, “Every Vein a Tooth,” appeared in Gulf Coast 22.2 and her debut collection, Birds of a Lesser Paradise, was published by Scribner in March.. The collection is filled with stories about women whose lives are so intertwined with nature and animals that to tell the story of the wildness of the natural world is to tell the story of the characters’ inner worlds. The writing is haunting but intermittently hilarious, as the tough-voiced heroines confront their vulnerabilities in some absurd circumstances: while begging an African parrot to talk at a roadside zoo, while helping a violent inmate put down a hurt calf, or while laid out on a veterinarian’s exam table, scared and awed.Megan hails from North Carolina, but is now a teacher and writer living on a farm in rural Vermont with her veterinarian husband (“the Dogtor”), two young daughters, and several animals. Peek in on her life at her blog at www.mayhewbergman.com, where you’ll find such things as a picture of her spaniel spooning a kitten, as well as Megan’s book tour musings. She took some time out of her hectic life (between giving a reading at Book Court in Brooklyn and jetting back to Vermont to take her kids to the Sugar Shack for some maple cotton candy) to answer some of our questions.
—Aja Gabel


Aja Gabel: It seems that writers sometimes go through a long process to figure out what their “thing” is—that is, what concerns tie their work together, what their obsessions are. You certainly seem to write about animals and the wild and also about the way the gruesome laws of nature act on our daily lives in beautiful and tragic ways. Can you describe your process of figuring out what you wanted to write stories about? Was there an “ah-ha” moment along the way or a particular story that anchored this collection for you?


Megan Mayhew Bergman: If I look back at my academic career, the first time I sat up straight in my seat and stopped drawing trees in my notebook was during an Anthropology of Gender class. My professor spoke so convincingly on the biological and sociological basis for our behavior as men and women, and on the “self”—that – that cchatty apparatus that is a mutation, a biological accident— – and causes us so much trouble (a la the Wildean notion that “we are each our own devil”). One day my professor abruptly announced that altruism didn’t really exist, that people only did good things for other people because it made them feel good, or gave them an advantage in society. I was biting my nails the entire class. I still sit up at night wondering about that, turning the idea over and over in my brain. (It’s one reason I can’t wait to read E.O. Wilson’s new book, The Social Conquest of Earth.)

I guess what I’m getting at here is that I started to look at people differently, like the animals we really are. I love that complexity, the idea of being caught off guard by your own primal nature. I knew I wanted to explore it with my work.

The earliest story that made it into the collection is “The Cow That Milked Herself.” I wrote the first page of that story and had a feeling that it was right in a way other stories hadn’t been right before.

AG: You’re a former southerner now living on a farm in the far north. A lot of your stories are populated with distinctly southern, hardscrabble women. How has your shifting geography affected how and what you write? Do you consider yourself a southern writer?


MMB: I think the southern tradition is phenomenal, and I hope my work shows traces of it. Place is important to my work, but I’ve realized lately that my work is more concerned with proximity to nature, or rural life, and less about north or south.

Most of the collection was written while I was still living in the south, and it would be hard to replace the storytelling traditions I’ve absorbed, or diminish the impact that Flannery O’Connor’s work had on me as an early writer. Can we revisit this question in a few years?

AG: Richard Bausch said something recently about how we don’t ever really learn to write, but instead we only learn to write the thing in front of us, and that what we are learning in the bigger picture is how to put together a writer’s life made up of discipline and good habits. Do you have good habits? Did you have to train yourself or did it come easily? What does “"the writing life”" look like for you as a mother to two young children and a caretaker of so many animals?

MMB: I have some good habits, and some bad ones too.

My good habits: I don’t really watch television. I read a lot. I teach, which makes me think about what makes good work. I run, which helps me work out plot points and combat nerves about a first book. I parent, which is radically humbling and physical and informs my characterizations. I always have a short story in progress. I try not to read rejection letters twice.

My bad habits: I read my Good Reads reviews. I don’t protect my writing time. I don’t sleep enough, and then I try to cram a day’s worth of work into an hour or two and can’t find clarity or creativity.

My writing life is nonexistent some days. But on a good day, I run out the front door with my computer when the sitter comes. I settle into my office, which is a total shithole in an old veterinary clinic across the driveway from my house. I move the spiders, ignore the coffee ring stains, and work for a few hours. I love losing myself in my work, and I can only do that with at least three hours to myself. Sadly, this rarely happens lately. I need to reclaim writing time.

AG: Can you talk a little bit about the story that appeared in Gulf Coast, “Every Vein a Tooth?”? It’s a haunting story, fragmented and existing in a kind of dreamt world where the wry dreamer keeps looking away from the painful thing. It reminded me a lot of Amy Hempel stories, actually. Is she an influence? What was the inspiration or seed for that story?

MMB: Amy was definitely an influence. She was one of my teachers at Bennington, and my thesis advisor, and of course I wanted to please her as a teacher. (Can I tell you how incredible it is to get Amy Hempel’s edits back in the mail? I used to rush out of my door at the mail man, practically pulling envelopes from his hands.) What inspires me even more than Amy’s writing is her work with dogs, her commitment to living a life outside of writing.

The seed for “Every Vein a Tooth”…well…I think it was a caption on a photograph of a leaf at a nursing home. Or it’s the phrasing my mind settled on as we drove away after visiting my husband’s grandmother. I liked the double meaning of vein and tooth, the accidental menace.

When I was growing up, I idolized a woman whose animal rescue habits ended up driving her husband away. I think she’s lurking in this story. I’m always fascinated by choices, especially if they aren’t good for a character. There is such great complexity in the beliefs we hold, the people we value, and the actual decisions we make.

AG: As the publishing world begins to depend more and more on online networking and word-of-mouth through places like Twitter and Facebook, how are you navigating it? How are you striking a balance between being involved in the online conversation and being appropriately unplugged from technology?

MMB: I was initially really uncomfortable with Facebook, Twitter, and blogging, but I decided that if I was going to give becoming a writer my best shot, I was going ALL IN.
But I’m not really all in. I’m about 75% in. I disappear for weeks at a time, fall into the parenting abyss.

I feel that I only have a matter of time before my daughters start ignoring me in favor of technology. That means I have to model good “present” behavior— – how to talk to one another, how to be present outside. Nothing infuriates me more than when I see parents ignoring their kids in favor of a phone. I totally catch myself doing it, but I think it’s horrible. So what I’m saying is that I shame myself into mindfulness about technology, and I strive to be more mindful.

AG: What are you reading and loving now?

MMB: I just finished Lauren Groff’s Arcadia. I’m a superfan of hers. Her sentences amaze and inspire me.


Aja Gabel is a writer living and teaching in Houston, TX. Her fiction can be found in the New England Review, the Southeast Review, Bat City Review, and elsewhere. She is currently in the PhD program in literature and creative writing at the University of Houston, and is a Fiction Editor at Gulf Coast. 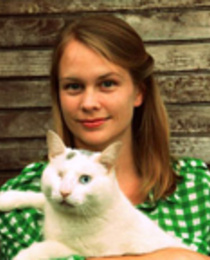