METALHEAD ON THE DANCE FLOOR

It’s late on a Saturday night and Metalhead is at some kid’s basement party. The kid got the new Slayer album that afternoon and has it blaring because his parents are not home. Rockgod holds both hands up in the air like he is prey for bandits, but the rest of his body convulses, his head shaking back and forth, up and down and windmilling along with the drum beat. Metalhead laughs and then there is a body careening into him, pushing him into another kid who is jumping and shimmying against the wall because heavy metal is the stuff that binds kids together, the fray that keeps their blood inside them. When Metalhead’s sister has her friends over, they dance in the living room to Madonna or Culture Club while his father complains that the music is too loud. Metalhead can feel the guitar in his teeth, can feel the speakers’ rumble deep in his chest. He tries to ram his shoulder into Rockgod, but his friend sidesteps him and Metalhead knocks into a couple of girls stomping their feet and bashing each other with their elbows. Metalhead will graduate high school one day, never having gone to a school dance, and that’s fine because heavy metal is the opposite of a punch bowl, the difference between being tired and being tired of living. Metalhead staggers backwards and whirls around into a flurry of bodies drawn to one another by that furious need to crash against something that won’t kill anyone. One day, he will be at a wedding and his girlfriend will ask him why he won’t dance with her. He will say that music doesn’t make him want to move his body. He doesn’t dance because it’s safer for them both if he doesn’t.

Metalhead died when he was seven: pneumonia and that rattle in his chest like a Yahtzee cup—the doctors thought his fever might result in brain damage, but then he became a ghost, a gasp and wheeze during gym class and in the dead of winter. Metalhead died when he was fifteen: a pair of crossed skis sent him tumbling ass over heels off a cliff and into a snowbank where he skidded down the hill on his face while Rockgod’s terrified laughter echoed after him—then he was a phantom nursing a thermos of hot chocolate in the lodge until it was time for the bus to take the kids home. Metalhead died when he was seventeen: most likely a dose of bad mushrooms in the back seat of Rockgod’s car. He was a shade, the world fading to a whispery fog for about thirty minutes, the Rolling Stones blaring from the cassette deck. He thinks about dying often, Metalhead after Rockgod joins the army and ships out to Iraq. He thinks about the time Rockgod got drunk and crashed his car into the 7-Eleven near the high school. They were both specters after that, thumbs out roadside and haggard like January wind. The time Rockgod goaded him into a fistfight at a baseball game and then bought him a six pack of beer afterwards to soothe his vanished pride. One day, Metalhead’s sister will be freshly buried, his parents long since turned over to the crematorium. He will be a ghost holding an electric guitar and making sounds like mangled baby birds. When the orderly asks him if he is okay, Metalhead will drawl, time is on my side and then bash that guitar into the floor.

METALHEAD AND ALL THE WATER

Metalhead sits in Rockgod’s truck listening to Def Leppard singing an immense song about heartache and fading flame. He looks out at Lake Erie and tries not to think about Rockgod and Valkyrie together in the truckbed. He has crushed on Valkyrie since seventh grade when they listened to his father’s records, beating on sofa cushions and playing broomsticks like they were Flying V’s. He thinks about how if the lake was the ocean, the waves would eat at the shoreline until one day all of Detroit would be underwater. He listens to the radio’s staticky signal and tries not to think about Rockgod’s hands under her shirt. Instead, he imagines the starfishes’ homesickness when they look up at the night sky, the seagull’s envious cries fading to hungry wind the farther they drift from shore. Outside: hushed laughter and a gasp, and Metalhead turns the radio up until the windows rattle. One day, he will lose track of his friends, but will learn that Rockgod sleeps in homeless shelters and under bridges after his service in Iraq. He will learn that Valkyrie has three kids, two ex-husbands and a degree in communications from East Michigan University. One day, Metalhead will have an ex-wife who refuses to say his name, and as they sit together at Denny’s on their daughter’s birthday, he will think about how Lake Erie won’t ever become the ocean no matter how hard it tries. He will think about how all he wants is for Rockgod to be seventeen again, both of them whole and listening to tiny songs together. He will think about how we are who we are until we can learn to move the Earth, until we can evaporate and vanish into the wind. 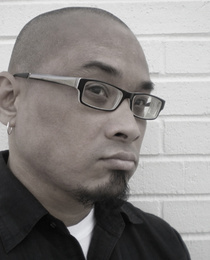 W. Todd Kaneko is the author of The Dead Wrestler Elegies (Curbside Splendor 2014) and co-author of Poetry: A Writer’s Guide and Anthology (Bloomsbury Academic 2018). His poems and prose have appeared in Bellingham Review, Los Angeles Review, Barrelhouse, The Normal School, The Collagist, and many other places. A Kundiman fellow, he is co-editor of Waxwing magazine and lives in Grand Rapids, Michigan, where he teaches at Grand Valley State University. Visit him at www.toddkaneko.com.