Death of a Dog

Originally published in 1976, and then again in 1977, “Death of a Dog” was part of the collection, Death of the God of the Sea, New Culture Publishers, Cairo.

His skin was peeled in so many places, you can't recognize the color of his hair, but when you view the rest of the tufts on his forehead, one could say it was just normal brown...He was ancient, and had spent his years in one of the alleys: skirmishing with other neighborhood dogs, tricking the butcher in order to snatch a bone from between his legs, and in the short, pleasurable moments, pursuing the traces of females or besieging a cat by a certain wall when...

But those days were gone...his bones have become feeble and his ribs are protruding from his body—he's slow.

One day, a bulb flashed in his head when he decided to leave the neighborhood for a nearby orchard...There, far from the heat, the battles, and the fear, he would grant himself---maybe for the first time in his life---a time to muse upon his situation.

He crawled on his belly under the fence into the orchard, which had witnessed his days of bravado—romantic promenades.

And now, while he was sitting on a small mound of dirt, his eyes surveyed the places...he could smell the pollen of the palm trees, merging with his memories, feeling as if this land were his...as if he can strut there alone, treading there with his paws,  leaving a trace of himself wherever he wished.

He headed to a damp, shady spot. The cold embraced his ulcerous skin... He rolled over repeatedly until he was calm again. He lifted up his head, and leaned it between his claws and then, closed his eyes. Sleep was the farthest thing from his intention.

He does not remember a thing about his early years, but he grew up (as always) to find himself in a poor alley—(where people threw nothing from their homes outside their buildings, but garbage, and children.) That's why it wasn't that easy to get a bite....and with the existence of this chorus of rough dogs—life had become harder day after day.

When he now reflects on his case...he finds himself coming out of the struggle, neither a winner, nor a loser....Since he does not have a place for shelter, food, or a life of luxury.

Was it bad luck? He was not handsome enough to fascinate an owner. He also grew up stubborn enough not to wag his tail for those coming and going... In fact, has learned not to trust this two-legged creature, even if it were a child.  And who would know what an extended hand might hold...A piece of bread or a stone?

At the same time, he was not completely down since he was able, despite his cruel circumstances to survive...hunger, his peers' fangs, children's torture, and bullets...
His skin was cankered by wounds... He did not die, which was something to be proud of. But....what a life!

He raised his head, viewing from afar a crow, darting towards the ground, picked up something with his beak, then flying away...

It was a tiring life!...Where he was losing his teeth and his claws were cracked; in fact, he even thinks he is good for nothing...but death...and who knows how long he will have to wait for it?  And how should he fill his tummy until then?  Would he bow his head in his old age and wag his tail, and rub himself against this or that with so little time to live? He, who has never done that in all his life? Maybe a quick death could end this destiny?

Alarmed, he raises his ears...Why hasn't this idea crossed his mind before? Since he did not choose the alley in which he was born, and the lifestyle which he lived---at least, he could choose his own death...and because he is a dog...he could pretend he had rabies and scratch the leg of one of these boys, come out after nightfall when people are asleep...to the main streets to take a bullet.

But this is an easy choice...And it isn't wise to grant others the pleasure of getting rid of him...in fact, it must be a death, against their own will. A death that throws some regret, even sorrow in their hearts.  A chic, luxurious finale to compensate, even a little, for the sourness of deprivation, which he has been choked by, day after day. A death to initiate him into that clamorous, colorful world which he has often longed for and yet escaped.

When the sun hid behind the palm fronds, the dog got up from his nap. He took one last look at the orchard and sneaked under the fence toward the main road.

Cars darted in front of his eyes, blowing dust in his face.

A luxurious car---this is what he has in mind---but while he was looking at these wondrous machines, he was confused by what he meant by luxurious. Were they the bright-colored small cars?  Newer, shiny cars? The famous red mountain, packed with people? Or that black one with the strange siren?

He did not know it would be that hard....to choose precisely, so he does not end his life with a glitch. He withdrew to the sidewalk. A new problem has come up.

He lurched near a eucalyptus tree trunk, and mulled it over. His senses assured him the death machine should mean everything he dreamed of.... It must be cheerful, glimmering, and immense in order to inspire awe...He has a mysterious, secret feeling that he won't miss it.

And with such overwhelming premonition, he stood at the edge of the sidewalk, waiting. In one fleeting moment, he was about to commit a horrendous sin. Yet before hurling himself onto the street, he twisted his neck...As soon as he gasped for air, he saw it coming.

The vehicle of his final dream.  Silvery...Posh...Clean...Exactly, like he wanted...it was close to him. His heart fluttered for a second before he surrendered...

The driver heard the sound of something crashing into the wheel, and then, he stopped talking. He stuck his neck out. His work mate, who was watching the road, said: "Another dog."
The driver pulled over and then, pointed to his co-worker who had gotten out, close to the dog. His mate grabbed the tail and pulled the carcass toward the rear of the car, opening the metal flap and then lifting the dead dog from his limbs, heaping him on top of the piles of dirt, garbage, peels, and the carcasses of other dogs. 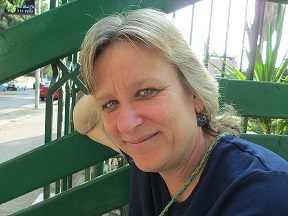 Gretchen McCullough is a fiction writer. Her stories, essays and reviews have appeared in: Archipelago, The Barcelona Review, NPR, Storysouth, Guernica, Mediterranean Poetry, The Literary Review and The Common, among others. Translations in English and Arabic with Mohamed Metwalli include: Nizwa, Exchanges, Banipal, Brooklyn Rail inTranslation and Al-Mustaqbel. Her bi-lingual book of short stories in English and Arabic, Three Stories from Cairo (2011), translated with Mohamed Metwalli, and a collection of short stories, Shahrazad's Tooth, (2013) were published by Afaq Publishers in Cairo. Currently, she is a Senior Lecturer in the Department of Rhetoric and Composition at the American University in Cairo. Her work is posted on her website: www.gretchenmccullough.wix.com/gretchenmccullough 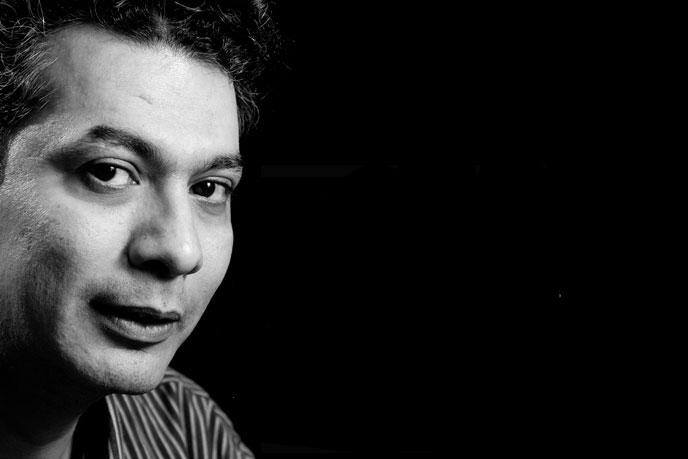 Mohamed Metwalli won the Yussef el-Khal prize by Riyad el-Rayes Publishers in Lebanon for his poetry collection, Once Upon a Time in 1992. He co-founded an independent literary magazine, el-Garad in which his second volume of poems appeared, The Story the People Tell in the Harbor, 1998. He was selected to represent Egypt in the International Writers' Program, at the University of Iowa in 1997. Later he was Poet-in-Residence at the University of Chicago in 1998. He compiled and co-edited an anthology of Off-beat Egyptian Poetry, Angry Voices, published by the University of Arkansas press in 2002. He published his third collection The Lost Promenades in 2010 by the independent al-Ketaba al-Okhra publications. The same collection was republished by the General Egyptian Book Organization (GEBO) in 2013. A Song by the Aegean Sea, his latest collection of poetry, was published by Afaq Publishers, Cairo in 2015.

Buthaina Al-Nasiri was born in Baghdad in 1947 and took a degree in English literature from Baghdad University. She is a short story writer and translator and has lived in Egypt since 1979. Six of her short story collections have been published in Arabic in Baghdad and Cairo. A selection of works, Final Night, was translated by Denys Johnson-Davies, and published by the American University Press in 2002. The same selection of stories appeared in Italian as Notte Finale, published in 2003 by Baldini Castoldi Dalai editore. Her stories have been translated into French, German, Swedish, Norwegian, Spanish and other languages. Most recently, in 2016, her complete collection of short stories (1974-2015) was published in Arabic, by Kutobhana Press in Cairo. She has also translated many books into Arabic: Journals of American Soldiers in Mesopotamia, published by AlHadara Al-Arabia Center, 2008, Cairo; Ben in the World, by Doris Lessing, published by Egyptian Book Organization, 2009, Cairo; The Stone Virgins, by Evon Vera, National Center for Translation, 2011, Cairo; and American Idol After Iraq: Competing for Hearts and Minds in the Global Media Age, by Nathan Gardels and Mike Medavoy, National Center for Translation, 2015, Cairo.