"Why are we still here?" asks playwright, social entrepreneur, trafficking Survivor-Leader and abolitionist Regina Evans at the climax of her one-woman show 52 Letters, a production composed as a truth ritual highlighting the local realities of human trafficking. Here is "the space where the bartering and selling of our children is at a tipping point." Here is Oakland, the epicenter in a trafficking triangle including San Francisco and Contra Costa counties.1 And it is here that Kenyatta A.C. Hinkle conjured a spell with The Retrieval, her solo show at the San Francisco Art Commission (SFAC) Main Gallery in the spring of 2018.

Hinkle's work is largely research-based and anchored to an impressive repertoire of writings and recordings left behind by Black women. Fixed to the walls of her Oakland studio, photographs of fabulous, familiar, and forgotten Black women watch Hinkle work. They hold her accountable.

India ink meets large sheets of Dura-Lar, a translucent acetate-based film, by way of handmade brushes the artist forages from nature and uses until they are reduced back to common branches, bits of twine, Spanish moss, and feathers. This foraging belongs to a tradition of resourcefulness Hinkle claims as her inheritance as a Black woman. Hinkle's un-portraits channel the energy of Black women and children from the African Diaspora rather than descriptively reflect their appearance. The women that take shape in Hinkle's fluid black forms are full of a kinetic energy, channeled into them by the artist's dance-compelled mark making. Forcing the artist to reckon with them on their own terms, some women desire precisely-coiffed baby hairs, or many legs, or multiple breasts and hands.

Inspired by the history she holds in her own body, Hinkle’s affinity for the historically-vulnerable bodies of Black women has been a major through line of her work. At this point in the artist’s journey, we have already witnessed several incantations of what Saidiya Hartman refers to as “the impossible goal” of redress in the archive of slavery (and its afterlife).2

The accumulative nature of Hinkle's concurrent series gestures towards Viviane Saleh-Hanna's theory of "Black feminist hauntology."3 Heavily inspired by Toni Morrison's theory of "rememory," Black feminist hauntology reveals, through ghostly reemergence, the ways White supremacist structures of violence have been perpetually unveiled by the presence of Black women. Each of the unending series emerges, at the artist's will, into the body of another, resulting in a rich intertextuality that disrupts colonial logics of time and space and deepens the political charge(s) of the artist's canon. In The Uninvited Series (2008–), Hinkle creates disruptive counternarratives by drawing and painting on top of late nineteenth- and early twentieth-century postcards of West African women taken mainly by French colonialists. These ethnographic photos sought to brand Black women's bodies as dehumanized figments of hypersexualization and conquest, triggering both repulsion and desire. Hinkle's interruptions of colonial narratives give the women the ability to redress themselves as otherworldly figures subverting the colonial gaze. The Tituba Black Witch of Salem Series (2013–) utilizes the artist's lived experience of navigating the world in a Black, pregnant body, and draws from the literary archival work of Maryse Condé's I, Tituba, Black Witch of Salem. The Evanesced (2016–), one of two current bodies of work featured in her solo exhibition at the SFAC Gallery, venerates "more than 64,000 missing Black women in America and the historical disappearances of Black women throughout the African Diaspora."4 In the artist's words, 64,000 is a "sublime" number, "sublime" not because it inspires great admiration but because it forces you to reckon with it spiritually and morally. If more than 64,000 Black women are missing, where did they go? Who is missing them? Who is looking for them? How am I, are we, complicit in their erasure? The women dancing through Hinkle's brushes, becoming the un-portraits of this series, are here to elicit honest answers. While the central focus of each series shifts location, their combined effect is a robust conversation pulling past, present, future, history, and myth into and beyond each other, utilizing Blackness as a permeable, transcendent substance.

Hinkle offered a re-membering of the Black female body replete with movement, color, and kinship with an earlier series of one hundred small scale, brown paper Evanesced drawings. Her newer Evanesced cohort has a greater task at hand. In its current iteration, the women and children of The Retrieval ask you to contemplate the living people we render as ghosts. The work is a call to action, an invitation to see those who are often overlooked. The Evanesced: The Retrieval brings global concerns about Black women's disappearances throughout the African Diaspora into the social and political contours of Los Angeles and the East Bay. In its movement along the West Coast, the work represents Black women in ways that aren't shrouded in victimhood and offers a meditation on the abstract forms that the presence of Black women assumes when we know safety and legibility to be expensive myths. 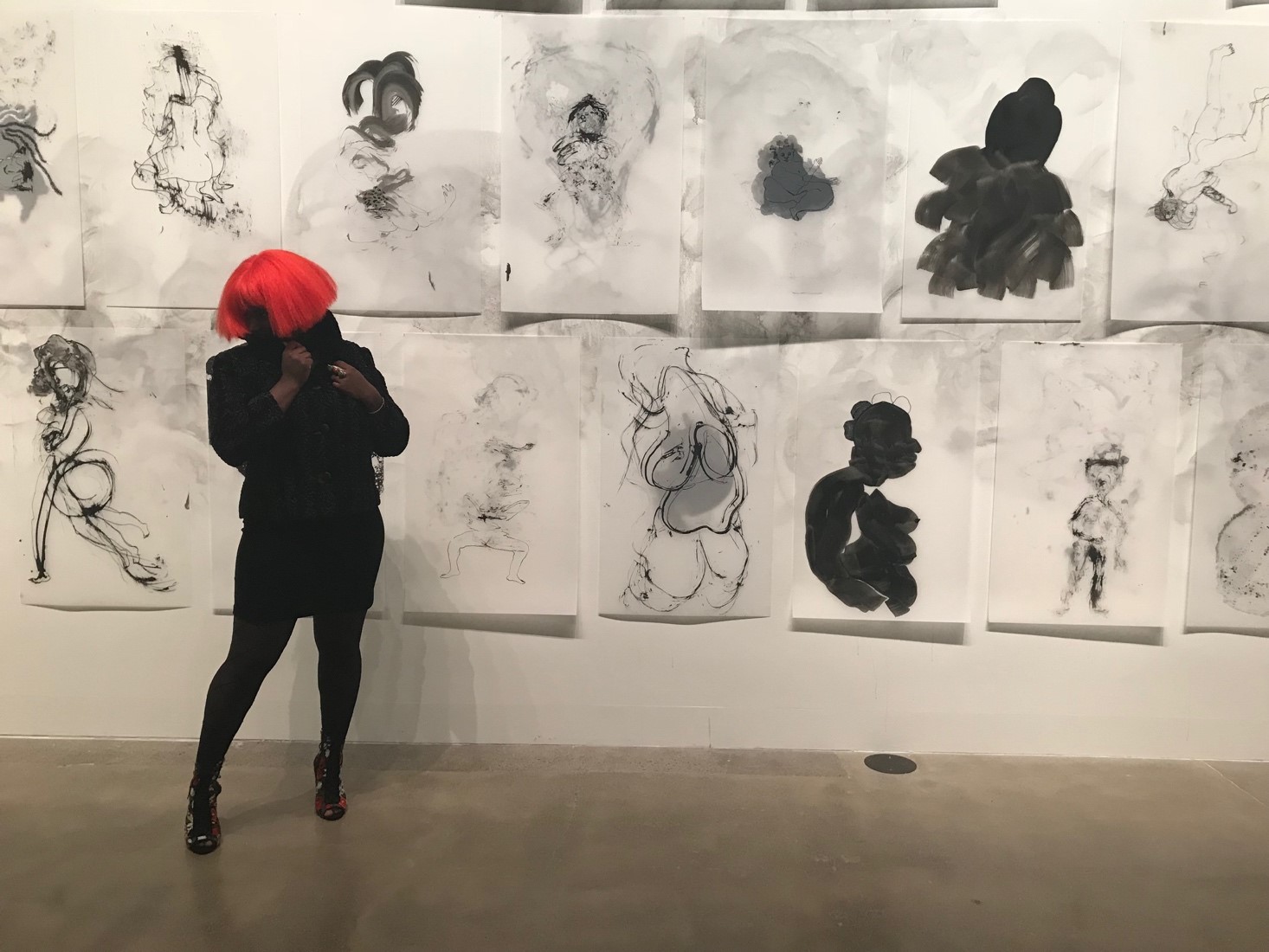 Hinkle posing with a portion of The Evenesced: Retrieval series

Central to recent exhibitions are large-scale objects from Kentifrica—a physical and theoretical location conceived by Hinkle. Holding the artist's investments in geography, Diaspora, personal vs. collective histories, and the problematics of museum space, Kentifrican artifacts in the gallery space often assume an active role in each shows' narrative. In The Retrieval, the Kentifrican Ashentee Healer, a Egungun-inspired figure, represents the Yoruba masquerade tradition of ancestral reverence in Nigeria and beyond. The Kentifrican Ashentee Healer sports swaths of brightly-colored cloth and a headpiece made of kanekalon braiding hair to conceal the wearer's identity. According to traditional Yoruba custom, the masqueraders must be men, and seeing their flesh is a grave offense. The Kentifrican figure rearticulates this form of spiritual masquerade through a markedly Black feminist performance aesthetic. In the accompanying video work, the Kentifrican Ashentee Healer makes her presence known day and night throughout the urban landscapes of San Francisco and East Oakland, as she wields a "horsetail" made of blue ombre braids, evoking spirit to cleanse the conveniently unseen places into which Black women fade. In the exhibition, the Ashentee Healer stands vigilant near the center, greeting viewers with her masked gaze as they enter the gallery.The vibrance of her silent and assertive posture watches over The Evanesced.

When the women of The Retrieval offer you their backs and breasts, something more complicated than sexuality is displayed. In traditional West African iconography, the figure of a woman supporting her breasts with both hands is a sign of giving. This bodily offering indexes spiritual coolness or gentleness of character.5 But functioning as more than metaphor, the women's bodies, breasts heavy with life, offer themselves to the mouths of their children. In US and colonial histories, there exists tale after tale of the roles enslaved wet nurses and "mammies" played in sustaining the Worlds around them.6 In Hinkle's oeuvre, these women refuse. By turns, they withhold their faces, dripping into and out of easily recognizable forms. They are less concerned with their inherent (in)visibility and more adamant about forcing the audience to reckon with their (un)knowability. Which is to say that you may see Black women's "excess flesh," but you may never know it intimately.7 Visibility does not equal consent.

A figure that Hinkle refers to as "Abiku" sits atop Dura-Lar in an assertive fetal position. The figure's posture indexes its name and the Yoruba tale of forest spirits continuously born only to die in infancy tormenting the mother. Abiku's bubbly blackness conjures an un-revered spirit. This story's contemporary relevance is not lost on me: Black women have organized against alarming infant mortality rates for decades, culminating in the 1990s in the movement for Reproductive Justice.8 According to the US Center for Disease Control and Prevention, for every 1,000 live births, 11.7 Black babies die in the first year of life. Represented as Abiku, these Black babies are sought out for what they have to teach, Socratically asking the viewer: How do you contribute to the conditions of my mother's labor?

One woman dances with arms winged behind her, gaze trained on the ground, heavy breasts akimbo. Her posture is that of a jumping stomp reminiscent of a ring shout; her body is instrumental, the blur above her head a grey aura of sound.

One woman throws her face as feet kick from under her and an outstretched hand appears, poised to catch. Below her another woman swims with arms poised to gather up the blackness at the bottom of the frame.

One woman is seen in descent. Her head tilts back, arms raised in surrender, chest open to the fall, feet doubling each other in motion, braids buoyant. She is flying.

One woman sits pretty, her body rendered a black (w)hole the universe swirls inside of.

Do you know these women? Can you find them?

There is a difference between a spectator and a witness. When spectators look, they are not obligated to see. Spectators treat looking like a luxury, walking through the gallery space with the same energy that moves them through the aisle of a department store. Hinkle's work demands witness. In the artist's own words, a witness is "somebody who will stand, who will not turn away, who will recount what they've seen for justice." To view and experience The Retrieval is to become acquainted with Black women in their most intangible refractions. Here the eyes, smiles, figures and stories of the African Diaspora careen into and through one another with the dance of a brush stroke. These figures carry in them a challenge to the historically imposed vulnerability of Black female flesh.9

Those who view the work are tasked with really seeing it and allowing the viewing experience to move with them as they exit the gallery and traverse the darkened corridors of the San Francisco Bay Area.

"You may go, but this will bring you back"
—Zora Neale Hurston10

An earlier version of this essay was commissioned by the San Francisco Arts Commission Galleries for their solo exhibition, Kenyatta A.C. Hinkle: The Retrieval. Ms. Hinkle is a 2019 recipient of SFMOMA's prestigious SECA Award, an exhibition on view through April 12, 2020.

[1] Quote from her one-woman show 2 Letters, which brings awareness to the issue of sex trafficking in the US. Sian Taylor Gowan, Surviving International Boulevard, Documentary, 2016.

[10] Introduced to me by Hinkle, this recording is held in the Florida Memory archives and was made while Hurston worked for the WPA in 1935 and 1939. In the recording, she can be heard saying she learned the song from a big crowd. When asked how she learned from the crowd, she replies: “I listens as best as I can...and then sing back to the people until...they are quite satisfied that I know it...then I carry it in my memory.” This is how Hinkle describes her relationship to these ghosts Zora Neale Hurston, "Halimuhfack," 935, State Library & Archives of Florida, https://www.floridamemory.com/audio/hurston.php. 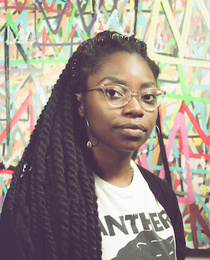 Ra Malika Imhotep is a Black feminist writer and performance artist from Atlanta, Georgia, currently pursuing a doctoral degree in African Diaspora Studies at the University of California, Berkeley, with a emphasis in New Media. Her academic and creative work tends to the relationships between black femininity, southern vernacular aesthetics, and the performance of labor. In addition to being the co-convener of the embodied spiritual-political education project The Church of Black Feminist Thought and a member of the curatorial collective The Black Aesthetic, she was a 2019 Omi Arts ‘Creative Arts Practice’ Artist in Residence at Ashara Ekundayo Gallery and a 2019 DAMLI Fellow at the Cleveland Museum of Art.