It was one of those thunderstorms came on sudden-like. Before a body could cover its head it had passed on someplace else. Here, in our holler, we were used to such storms. We liked the surprise of them, usually, liked how some clouds seemed to gather up heavy water already in the air and wring it back out again. What was different about this storm, that first one late June, was what it left in its wake.

We mistook the baby’s squalling for outside noise for a stretch. Then Mama left supper going on the stove, fed-up she was with the racket, to shoo whatever creature it was away, but when she got to the corner of the yard, broom clutched in hand, she saw the naked wriggling pink thing, there, in the black dirt.

Well, what was one more mouth to feed? Accustomed we were to sharing every scrap, every bit.

Very next week there was another storm like the first. It left a two-headed goat on the roof of the Babcock’s chicken coop. Ugly looking thing. We were struck by that more than its strangeness–how mangy it looked, how underfed, how its four beady eyes never did fix a single point. The Babcock kids built a high fence behind the coop to keep the goat from wandering and charged a nickel for every one of us who wanted to see it. We don’t know how the Babcock kids made out, all in all, but we noted with painful envy how they swaggered into school with new backpacks and pressed jeans that August.

Summer-long, we tracked the storms with some intensity. We never could quite predict when one would hit. Not every storm, it turned out, was giving in the same way as the one that brought us our new baby brother and the Babcock’s their showpiece.

Some things we found: a potted palm deposited in the middle of the square, two hundred plastic eggs, every one of them purple, a bat the size of a basset hound, a climatologist we named Earl we thought was maybe from Cleveland, we weren’t sure, he could only talk weather after his journey to us, sparklers that once lit never went out, clay dolls that looked suspiciously exactly like we did, and a wild-eyed girl, about our age, who turned into a largemouth bass once a month and had to be carried down to the McCreary’s pond before she suffocated on land.

It was the girl the men in the suits from Washington came for. After they took her away we talked about the men in the suits for a long while–how they’d turned up their noses at our mama’s meat pies, how they swatted at our hot earth clumped to their shoes. We missed our fish girl. Still, we keep our chins held up, our eyes pinned skyward, our fingers perpetually steepled, praying someday, some weather might bring her back to us.

Aliceanna Stopher is an MFA candidate in fiction at Colorado State University where she teaches introductory creative writing and works as an Associate Editor for the Colorado Review. She is the winner of the 2018 Crazyhorse Crazyshorts! contest and was awarded second place in the 2018 New South Writing Contest. Her work can be found, or is forthcoming, in Crazyhorse, New South, Anomaly, and elsewhere. 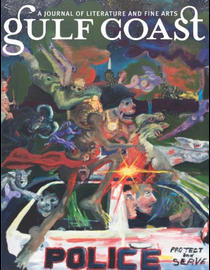