I was sitting on the edge of a bed in the emergency room in Richmond, trying desperately not to move my body. Explosive spasms of pain effloresced in my upper back and traveled down my right arm. A sequence of doctors had tried for hours to coax a dislocated shoulder back into its proper place, with no luck. Finally, one of them, also named Brandon, came in and asked me if I was familiar with Ketamine. “Um,” I said, nodding yes. “Have you ever heard of the K-hole?” he asked.

Indeed I had heard of the K-hole. A friend had told me a harrowing story about snorting too much K at a party on Haight Street one night, then lying face down on the sidewalk next to a heap of puke, immobilized until the drug started to wear off. It is a canonical drug story for me, a horrifying morality tale that has repelled any desire to dabble. But what choice did I have? Brandon and his colleagues had done all they could do; Ketamine was a last resort. “You might have some thoughts when it kicks in,” he said to me calmly. “Weird thoughts.” He paused, mulling over his choice of adjectives. “Dark thoughts.”

One of the classic manifestations of the K-hole is the feeling that one has died. Coincidentally, I had just read a number of books about near-death experiences, all those wonderful corny stories about going into the light, talking to your dead uncle, coming back morally improved. This is not the death I experienced. Ready for that warm white luminescence, the return of lost family members and friends, a perpetual banquet of oysters and Lillet, I was disappointed to find death both harrowing and tedious.

Trying to describe this experience to Brandon later, language failed me. Death had felt bureaucratic, a waiting room without magazines. The shape of the afterlife was spherical, an orb around which my dead body hovered, still as hanging laundry but scary somehow. I felt at once both larger than myself and profoundly minor. When the peak intensity of the drug’s dissociative high began to wear off, the room slowly came back into blurred focus. I could see my pants, but they weren’t in the same universe. At a great distance, they just sat there stubbornly on my body. “This is what it looks like to see your pants when you’re dead,” I thought.

Dust Balls is the title of a series of fourteen photographs by Mike Kelley, nine of which are on the seventh floor of SFMOMA, with a stray in the photography exhibition on the second floor. Mary Clare Stevens, executive director of the Mike Kelley Foundation, shared with me that they were shot with a 35mm camera on tinfoil by the artist himself. “They are not actually ‘dust balls,’” she remarks, “but lint from the dryer.” Lint is an aggregation of textile fibers in clothing. When we dry our clothes, the machine jostles lint out of their weaves, transforming it into common garbage. I mean, on the other hand, where there is lint there is life. Like Paleolithic cave paintings, lint signifies human intellection. 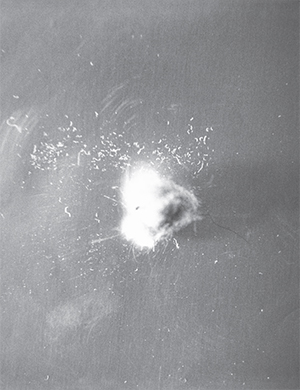 The photographs in Dust Balls render these small, insignificant pieces of human trash as sublime, apocalyptic natural phenomena. Without the parenthetical subtitle, one might mistake them for galaxies being born, or tremendous explosions in the sparse outlying areas of the universe where stuff like “galaxies being born” happens.

This warping of scale, portraying a little piece of lint in the dimension of a major outer-space event, reflects the uncanny as well, and recalls an interview in Minor Histories (The MIT Press, 1999, p. 77) in which Kelley discussed the experience of watching television: “you must mentally blow yourself up to the size of a giant to account for the minuscule figures on the screen.” Transgressions of space, like transgressions of time, displace the body, effecting a deletion of the self as it is replaced by something bigger, smaller, or in another epoch.

Kelley has linked the photographs which make up Dust Balls with other works, including Color and Form (1999) and The Two Faces of God (2002), describing them as “overt attempts at applying the aesthetics of painterly biomorphic abstraction to photography.” The “biomorphic abstraction” he refers to here is represented in part by Abstract Expressionism and the painters who emerged from that tradition. But it is also a quality he identifies in kitsch. Writing in Minor Histories (Ibid, p. 122) about a local landmark in Los Angeles known as the “Chinatown Wishing Well,” a whimsical, miniature landscape behind a dilapidated fence meant to evoke Chinese gates, he addresses the “formlessness” he adduces in the sculpture: Part of my admiration for such coloration is the murky unspecific ‘space’ it produces. I have recognized and appreciated this kind of space in paintings that span art history from the obscure, muddy backgrounds in Rembrandt’s paintings, to the primordial goo space of 1940’s biomorphic abstraction. Such space has an erotic appeal for me.; it is the confused ‘nothing’ space of presexual consciousness.

There’s a moment I treasure in Bill and Ted’s Excellent Adventure (1989, dir. Stephen Herek), a film about the utopian promise of art disguised as a low stakes time-travel comedy. Bill and Ted have arrived in the agora in ancient Athens, hoping to track down Socrates, so they can whisk him to the future, save their high school careers and, more importantly, their world-redeeming rock band Wyld Stallyns. Typical of their stops through time, they find their target right away.

Socrates is philosophizing between two big columns, next to an hourglass, delivering a lecture on the frail and impermanent nature of the human body (in contrast to the eternal life of the soul). The metaphor Socrates uses in this lecture for the human body is “dust.” It’s not a moment I recall from the Platonic corpus, but it doesn’t really matter for Bill and Ted’s purposes. Socrates is, after all, speaking Greek, a language these two splendid doofuses have woefully neglected in their academic curricula. Still, they have a purpose and stick to it. “Philosophize with him dude,” Bill enjoins Ted.

When Ted approaches the rostrum, Socrates pauses in his remarks, confused. And then Ted begins to speak: “All we are . . . is dust in the wind, dude.” As Socrates and his flock continue to look perplexed, not knowing English, much less the 1977 hit “Dust In The Wind” by prog rock dingleberries Kansas, Ted clarifies: holding up the hourglass, he motions to his body, then the dust inside it, then blows. That’s all we are, dust in the wind, dude.

"Dust Balls" was the winner of the inaugural Beauchamp Prize, judged by Darby English. Submissions are now open for the 2018 prize, judged by critic and curator, Wendy Vogel.

Brandon Brown's most recent books are The Good Life (Big Lucks) and Top 40 (Roof). His work has appeared recently in Art in America, The Best American Experimental Writing, Fanzine, Oberon, and Open Space. He is also the author, with J. Gordon Faylor, of three volumes of Christmas poems, most recently The Cloth Bag. He is an editor at Krupskaya and occasionally publishes small press materials under the imprint OMG! In 2018, Wonder will publish a new full length book, The Four Seasons.