Impossible to think of Frank and not think, shark.
His bathrobe flopped open once, and there it was,
bite of thigh missing, skin like a spider
tried to stop the hole with web. I never looked
at him again. My mother fixed him lunch
while I stared anywhere but the carved space
that was the scar that was Frank. He was my great-uncle.
In the family story, his father tells him not to take a swim:
the shark net is down. Everyone knows not to swim
without the net. He dives from the cliff. From the air, a fin.
His flesh unlaces. There are teeth embedded in his bone.
Before he died, I’d memorized the tilt of his recliner,
the pattern of beer bottles across his floor. Mapping
his aftermath like a frontier. The shark hovers inches
above its own shadow. Frank pulls off his clothes in the sun.
Emma Hine’s poems have appeared or are forthcoming in the Florida Review, Arts & Letters, Foothill, The Bitter Oleander, and Hayden’s Ferry Review. She was also the recipient of the 2014 Arts & Letters Rumi Prize in Poetry and a finalist for the 2014 Florida Review Editor’s Award. She is from Austin, Texas and lives in Brooklyn, New York.
Share Share on Facebook Share on Twitter 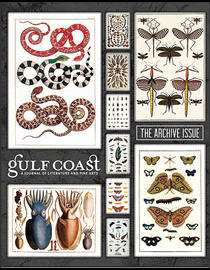