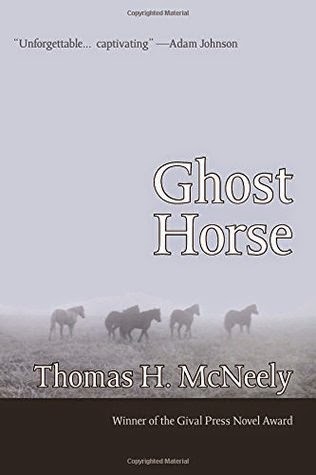 In the summer of 2013, I moved from Wyoming to Houston. My loved ones warned me against it; they were wary of heat and humidity, cockroaches as big as your thumbs, traffic jams, sex trafficking, and oil spills in the Gulf. Now I realize these friends were working with an image of Houston circa 1970, a decade that witnessed Houston schools’ (long overdue) desegregation, Dean Corll’s killing spree, and a truck carrying ammonia that crashed into the Southwest Freeway, releasing clouds of toxic fumes. Mercifully, the Houston that greeted me, though not without its woes, was nothing so grim. Think: complicated beauty.

Thomas McNeely’s first novel, Ghost Horse, reminds me why Houston put my nervous Nellies on edge. While nothing in the novel is grotesque, both psychological and literal violence smolder throughout. At times, that violence arises from the environment: a man has been dragged out of the nearby bayou, the characters carry the memory of boys murdered in a field, a husband hits his wife. More often the novel’s tensions feed on divisions—racial, class, gender, and geographic rifts—present in the Houston of then and (somewhat less so) now. Add to those divisions compressed prose delivered in the present tense, and the reader hurtles forward into a productively unsettling story that involves the rupture of virtually every aspect of a budding adolescent’s life.

Ghost Horse is in good company with other novels that reveal what a brutal business coming of age can be. For Buddy Turner, the novel’s protagonist, imagination is the number one way to find reprieve from his parents’ unraveling marriage, uncertain friendships, and the shifting, tested allegiances at home and school. When the novel opens in the summer before sixth grade, the mythic superheroes and monsters of Buddy’s favorite films and television shows mold his brain and its imaginative landscapes. Star Wars, vampires, Godzilla, and the B movies radiating out of boxy televisions amp Buddy and his friend Alex Torres up on hefty doses of horror-delight and inspire the boys to make Ghost Horse, their own movie.

These two working-class boys growing up in Houston in 1976 see their movie and “the Horse” at its core as a ticket to a Technicolor life where the bullies who call them fat and gay can no longer touch them. Though Alex spends hours drawing the mysterious Horse and Buddy promises a script, Buddy urgently needs an escape that movie making cannot provide. Their film, though integral to the novel, is not the predicament at the heart of Ghost Horse. Buddy is not simply caught between two worlds; he is being asked, forced really, to choose—by friends, parents, relatives—who he is and will be. Mom or dad’s house, if his parents separate? Should Buddy forsake Alex and his diverse school for Simon and the well-heeled white boys at St. Edward’s, his new private school? Will his life best unfold in the wealthy, oak-lined boulevards surrounding Rice University near Gramma Turner’s house? Or in the East End, where the bayou, factories, and Houston’s looping highways provide the backdrop to his mother’s and his Gramma Liddy’s homes?

Ghost Horse undertakes daring work when it explores the intersection of white and nonwhite immigrant communities, changing assumptions about working women, and the stigma then associated with divorce. The emotional tumult in these intersections power the novel. In a scene between Alex, Buddy, and his new friend Simon, Buddy acts as interpreter, sliding between English, Spanish, and Latin. Although no earthshattering exchange occurs, this tense negotiation sews the seed for one of the novel’s most searing, violent scenes.

The relationships between men and boys in this work are charged, especially Buddy’s relationship with his father. In one telling scene, we feel Buddy’s fear and confusion when his father forces him to run laps around the Rice University track:

He keeps his face turned from his father, listening to the rain whisper on the track. “Get up,” his father says, nudging him with his shoe. “We’ll have to do it again.” He kneels on the ground, squeezing his eyes shut. “Is this what you want?” his father says. “To lay out here in the dirt?”

On the ground, soothed by the rain and refusing to rise, Buddy is like Sisyphus watching his boulder roll downhill. The pause, the slow walk behind the boulder before hoisting it again, offers Buddy solace and a momentary act of rebellion against a man who both loves and hurts him.

In late October, I met Thomas McNeely and asked him about this love. We were at Bohemeo’s café, a brightly painted coffee shop in the Tlaquepaque Market, smack-dab in the neighborhood where much of Ghost Horse takes place. It became clear that the fraught relationship between Buddy and his father was linked to Houston’s complicated beauty. A native Houstonian, McNeely mined the city of his childhood and adolescence for the details animating Ghost Horse. But the setting of 1970s Houston also allows the novel to wrestle with major changes to the social fabric in which Buddy, his parents’, and his grandparents’ generations were wrapped. The novel dwells in historical time, giving the impression that even forty years later, these events represent the “now” of Buddy’s life. That present comes through slightly distorted, as “Buddy wonders if what he is watching is his real life, or the movie of his life, or something else that he can’t even imagine.” Through McNeely’s imagination, what becomes real in Ghost Horse, for Buddy and the reader, is Houston and the acute ache of a boy caught in the grip of life.