At the duty free just north of the Canadian border, Tim stood in line with a case of Labatt's under his arm. The Canadian kind tasted better, his dad always said, although Tim only pretended to tell the difference.

His eyes wandered the store as he waited. From the shelves divided into clear and brown liquors, to the signs advertising two-for-one deals, and finally over to the gift shop, where dream catchers, mugs shaped like moose heads, and celebrity-endorsed cosmetics were sold to dissatisfied travelers. Over by the perfume counter, Tim spotted a pair of blondes. Right away he saw that they were sisters—it was apparent in the way they interacted, too familiar and casual even for best friends.

One of the sisters picked up a pink box and the pair approached the checkout line where Tim stood. As soon as they faced him, he saw it. Not just sisters, but twins. And not just any twins: they were Denise and Teresa Osborne, girls he'd spent a dozen summers with from the age of three to fifteen.

They noticed him right away. "Tim? Is that you?" said the one on the left. "Tim Gallagher?"

"It's me," he said, not knowing which twin he was addressing. Back then, he'd learned to tell them apart by hair color and size: one was thin and blond, the other was thinner and blonder. And still he would forget who was who.

An expert, probably, at spotting this exact look of confusion, Denise introduced her sister by name. It was evident now that Teresa had been the thinner, blonder one, unless, in the eight years since he'd last seen them, they'd switched.

Tim extended an arm for two awkward half hugs overtop the case of beer. Behind Teresa's shoulder, he made a sour face. The perfume they'd sampled had settled heavily, and the result was a pungent musk more appropriate for an old lady than a good-looking girl like her.

"What are you doing here?" he asked.

"Canadians can shop at the duty free, too, you know," said Teresa.

"What'd you choose?" Tim asked, nodding toward the box in her hand.

Teresa blushed. "It's called Provocation." She lowered her voice for dramatic effect.

"Sounds serious," said Tim. He advanced to the front of the line and flashed his I.D. at the clerk.

"Headed to the lake?" Denise asked.

Tim nodded. "My parents are selling the cabin. I'm supposed to close up."

"That's terrible." Teresa put her hand on his shoulder.

Tim shrugged her off. "Divorce," he said, and looked down to sign his receipt. His father had just married his twenty-five-year-old intern, a girl who had been two years above Tim at college. They'd even shared a class, Intro to Biology. Come to think of it, she looked a little like the twins—angles, symmetry, calculated risk. And it seemed, suddenly, that all women looked alike, with their summer outfits and their carefully arranged ponytails, and when he raised his head, he'd forgotten which twin was which.

"I'm so sorry," the other one said. "Our parents aren't coming either." She grinned, and Tim allowed himself to consider the possibilities of a parentless summer. Skinny dipping, drinking during the day, staying up all night—all the forbidden pleasures of his childhood vacations were now almost certain to occur. And he had the advantage of claiming to know these twins well—they had, after all, met as children—but in truth they were strangers, as exotic as his dad's new wife had appeared the first time Tim watched her laugh off his own advances, as if to say no man under the age of thirty should bother flirting with a girl like her.

At the cabin the first thing Tim did was crack a beer, still warm from the car, and check the shed for paint. His father had made a list of chores to finish before the real estate agency came at the end of the month, and given him a couple hundred dollars for paint, lumber, and other supplies. Tim was already planning to mend the cabin on the cheap and pocket the cash, but now he saw it would be even easier than he expected. His father must not have remembered the extra shingles on the shelf, the pile of wood in the corner, or his mother insisting, ten years earlier, that they buy half a dozen gallons of paint when they changed the color. However many coats later, there were still four and a half cans left.

He pried the lid off the half empty can and as soon as he saw the color of the wet paint, a warm kitchen green, and smelled its chemical smell, he remembered his father painting the house for the first time, sending Tim to get him a beer every thirty minutes. Of course, he only drank like that at the lake. That was the thing about the lake: life's regular rules did not apply.

This was also the shed in which his father had first taught him to fillet a fish, and, looking at the darkened spot on the workbench where many bass had been deboned and gutted, Tim realized how much he would miss this imperfect place. The rust-colored water that stained the toilet and sink; pine trees, limestone and sky reflected in his father's aviators; his mother, never a good swimmer, sipping an early gin and tonic as she floated in an inner tube four feet from shore.

Tim pressed the lid back onto the can and decided not to start that afternoon. The sides of the cabin were dirt-splattered from summer storms and needed to be hosed and allowed to dry before taking paint. He also had the idea that if he worked all morning on the front of the house, where he could be seen from the water, there was a good chance the twins would stop by and say hello.

In the morning he got started painting too early, perhaps, because by noon the front siding of the house was finished and there was no sign of the twins.

To stay visible, Tim began working on the porch. His father had built it two summers ago while Tim stayed away at college, and it had never been painted. With the first stroke of bright green on the natural wood, Tim knew it was a mistake to paint the porch the same color as the house but kept going anyway. Painting had a satisfying rhythm to it, and he liked the idea of uniformly covering whatever was in front of him without asking any questions.

When one of the twins showed up, finally, it took him a moment to remember he had wanted to see her, whoever she was. He painted a few final strokes with his back to her, feeling her eyes on his shoulders but refusing to turn around. Finally he put down his brush and, although it was barely afternoon, offered her a beer. They stood on the lawn a few too many feet from each other, and without anything to talk about, turned to look at the water.

"She's mad at me," the twin said. "It's always something with Denise."

Tim smiled, glad to know who he was talking to. "What's she mad about?"

Teresa turned away from the lake to face him. "I was sort of pushing a subject she didn't want to discuss."

"Never mind," Teresa said. "I shouldn't have brought it up." She smiled to show it wasn't a big deal. She held her smile for a long time and it got wider the longer she held it, like a beauty queen's, only Teresa had crooked teeth. Crowded on the bottom, and with protruding canines on top.

"Oh my god." Teresa put her hand over her mouth. "Are you looking at my teeth?"

"My sister has straight teeth, that's how you can tell us apart." She smiled again, this time with her lips pressed together in a line that went straight across.

Tim smiled back at her, relieved she had an imperfection, however minor. "Do you want lunch or something?" he asked.

"Swim first, then lunch." Teresa stood up and went to the end of the dock where she removed her clothes, revealing a tiny bathing suit underneath. Her back was to him, and Tim noticed her ass, which, although it was smaller than he would have liked, looked ample in comparison to her narrow thighs. The water at the dock was just deep enough for a small boat, and Teresa sat down on the edge and used her toned arms to slide herself in.

"I think I got a splinter in my butt," she said, standing in the waist-high, brown water, waiting for him to join her.

He disrobed at the end of the dock, aware that she was looking up at him, wondering how the angle affected the pale, burgeoning beer belly he'd developed since graduation.

They swam out to a flat rock that rose above the water. As they approached, in slow, side-by-side breaststrokes, nearly a dozen turtles sunning themselves on the exposed platform heard them coming and dropped noiselessly into the lake. Tim reached the rock first and tried to climb on while Teresa treaded water behind him. There was a particular way to climb up, Tim remembered, a certain indentation to put your foot in and a crack to grip with your fingers. He must not have remembered it correctly, because the foothold he chose, which felt right when he pressed his toes into it, wasn't nearly deep enough and was slick with algae. He lost his grip and fell back into the water.

"You're out of practice," Teresa said. "It's over here." She swam a few feet to the left and climbed on easily. Tim followed, and they lay out like the turtles to dry in the sun.

"Are you really not going to tell me what the fight is about?"

"It actually has to do with you," Teresa said. She was lying on her back, and the sunlight, refracted off the water, shone through the space between the rock and the arch of her spine.

"Oh?" He tried not to sound too curious.

Teresa ran a hand across the water to splash him. "Don't get any ideas! We're not fighting over you. Yet." Fresh drops of water landed on her chest. "She didn't want me to tell you, but we don't know anyone else at the lake anymore, and I'm worried."

"It's probably nothing. It's just that last night we heard a noise by our cabin. By our bedroom window, in fact."

"Did you see someone?"

"No. But we both got the same feeling, at the exact same time. Like someone was watching us." She shrugged. "Maybe it was just a twin thing."

"Sure," Tim said, as if he knew all about twin things.

"But I don't know, it really felt like someone was there." She paused and looked across the lake. "Do you think you could keep an eye out, just in case? Let me know if you hear anything?"

"Of course," Tim said. He stood up and looked at the water. All around, tiny black heads popped in and out of the surface as the turtles waited for them to leave.

"Thanks," Teresa said. She stood up, noticing the turtles. "What do you know. We're surrounded."

To read the rest of this story, please purchase the issue here.

Halimah Marcus is co-editor of Electric Literature, an innovative digital publisher based out of Brooklyn, and its weekly fiction magazine, Recommended Reading. Her writing has appeared in One Story, Philadelphia Noir, Sports Illustrated, and elsewhere. She has an MFA from Brooklyn College. 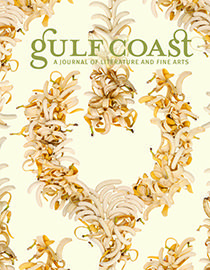