Such Hunger: A Review of Eduardo C. Corral's Slow Lightning

Such Hunger: A Review of Eduardo C. Corral's Slow Lightning


What is it anyway—lightning? How does it happen? First there’s a build, as pieces of storm weather collide and negatively charge the bellies of clouds. Then, objects below—church steeples, the Earth itself—become positively charged, creating an imbalance that nature seeks to cure by passing currents between the two charges. The passage of energy, nature’s inclination towards balance—these qualities are embodied in Slow Lightning, Eduardo C. Corral’s debut collection of poetry. But the detail of “Slow” in the title is not to be passed over. These are poems of tension and suspension, of The Moment Before, of mid-epiphany.
The opening poem, “Our Completion: Oil On Wood: Tino Rodriguez: 1999,” sets a foundation for the collection’s leitmotif of hunger both spiritual and sexual. We learn early that satiation comes at a price, as the poem begins: “Before nourishment there must be obedience.” Submission is a complicated pleasure, and Corral’s attention to that complication is one of the defining pleasures of this collection. If, as the philosopher Simone Weil suggests, “attention is form of prayer,” then Corral’s poems are prayers investigating the divine as inextricable from sexuality, which is inextricable from hunger.
Hunger in these poems is also unmistakably bound to lineage, though its articulations are various. In “Want,” Corral’s speaker describes his father’s wrenching trek through Arizona:

This matter of lineage—and its attendant pride and anxiety—is seen also through works of ekphrasis and homage, poems that claim rightful membership in artistic and ethnic communities. Corral asserts his place among poets via direct address or acknowledgement of influence, especially towards Robert Hayden, whose hand is seen throughout the collection. Chicano, Latino, and Mexican visual artists ranging from Felix Gonzalez-Torres and Gabriel Orozco to Frida Kahlo are honored through specific ekphrastic poems, and an aesthetic of surreal dream-like environs carries throughout the collection. In “Poem After Frida Kahlo’s Painting The Broken Column,” Corral writes:

9
The perfect shade of red:
the stain on an arrow pulled out of a dove.

10
Under the cold scaffolding of winter my love took me for a walk in
the desert. My breath crumbling like bread.

It is no surprise that visual art is a primary thread of the book—Corral is a poet with a painter’s eye. Perhaps this eye is what serves and inspires his lyric deftness and his ability to take risks with form and explore the physical possibilities of language.
In form and language, we again see Corral’s lineage; Slow Lightning is a consistently bilingual collection. The book reads without a sense of linguistic favoritism or showcasing—the use of Spanish isn’t a spectacle, it’s necessary and appears only when to use English would sacrifice cultural implications and flatten resonance. The fluid presence of two languages exposes a source of both joy and struggle—so many access points to different aspects of human life does not make for a quiet existence. “Border Triptych,” a trio of sonnets, serves as a vehicle to carry the voices of the Mexican-American border—illegal immigrants and border patrol alike. This series may be the most moving work of the collection, for while its form somewhat prohibits the immense lyricism Corral so expertly wields, it is here perhaps that we see the raw humanity with which Corral writes, as well as something essential about the engine of the book. It is a book of unflinching and graceful testimony. Corral’s is a body through which lightning passes, and stands to tell of it—a conduit for the beauty and complexity of our time.

Sophie Klahr is the author of the chapbook (Blank) Versus Recovery (Pilot Books), and the poetry editor of Gigantic Sequins. Her work has appeared or is forthcoming in Ploughshares, The Rumpus, The Normal School, The Offending Adam, Revolver, Southern Humanities Review, Rhino Poetry, Connotation Press, Sycamore Review, and elsewhere. She was born and raised in Pittsburgh. 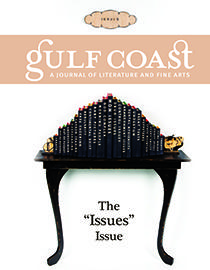